Free Resource for Everything Tennis

You are here: Home / Grips / The Best Tennis Overgrips for Sweaty Hands

Disclosure: Some of the links on this page are affiliate links. We may earn a small commission on purchases made through them. Our content is not influenced by commissions.

Playing tennis when you have sweaty hands can be problematic to say the least. The racket slips in your hand, you can’t get a good grip, you end up missing shots you know you should make, and it can even make your confidence drop.

Using the right overgrip can make a big difference. Ideally, you want to choose a dry overgrip for sweaty hands because tacky overgrips tend to get slippery when they’re wet.

In this article, we’ll take a look at some of the best overgrips that are specifically designed for sweaty hands. Then we’ll look at some other tips that can really help keep your hands dry and prevent your racket from slipping.

Below you can find our top picks for overgrips when you have sweaty hands. First we’ll look at our top pick, then a thinner overgrip for if you don’t want to add too much bulk, then we’ll look at a more economical option for it you want to keep costs down.

When I first tried a Tournagrip, it felt a lot different to any other overgrip I have tried. Unlike the tacky and almost wet feeling you get from other grips, Tournagrips are very dry at first but gain tackiness as you sweat maing them perfect for sweaty hands.

Personally, I’ve moved away from Tournagrips to more tacky grips, but that’s only because my hands don’t sweat too much. If I did experience sweaty hands, Tournagrips would be my first choice.

Tournagrips are fairly popular among the professionals and are used by players such as Andy Murray and Dominic Thiem.

One downside to Tournagrips is that they aren’t very durable at all. I’ve found them to last around half the time of other grips. Sweaty hands will destroy them even quicker too, so be prepared to replace them fairly often. If you like the feel of Tournagrips but want to squeeze a bit more use of them, you can try turning them inside out once they’ve started to wear down. This won’t work if you’ve got to the stage that they’re falling apart though.

Another thing to note is that the standard size is quite short and you may struggle to wrap it around the whole grip (unless it’s a junior racket or you only grip half of the handle for a one-handed backhand like Richard Gasquet does). They have an XL size which is what I would recommend for most people and have linked to below.

Another good overgrip for sweaty hands in the Babolat VS. Anyone who’s paid close attention to Nadal knows he sweats a crazy amount, and these are the overgrips he chooses to use.

The Babolat VS overgrips are thin. Very thin. They’re actually the thinnest overgrips on the market. This is good if you don’t want to add too much thickness to your grip, but like the Tournagrips, they tend to wear down a lot quicker than alternatives.

In terms of the feel, they’re kind of in the middle. They’re not as tacky as something like the Yonex Overgrap, but they’re not quite as dry as the Tournagrips.

One problem with the previous two overgrips is that they’re not very economical. They’re both fairly expensive as far as overgrips go, and neither are particularly durable. 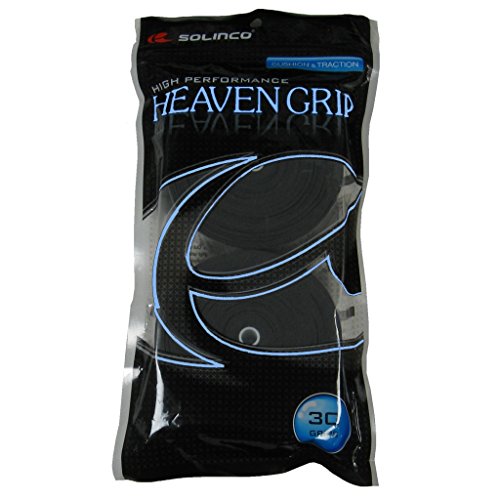 The Solinco Heaven overgrips aren’t particualrly well known, but they have been praised for being great for sweaty hands whilst also being reasonably durable.

They’re similar in feel to Tournagrips with that dry texture, but they’re also thicker so they won’t wear out quite as quickly. They’re a little bit less expensive than the other two grips as well, making them a great choice if you don’t want you’re overgrip costs to get too high.

Whilst the three grips above are designed for sweat absorption and are generally praised by players with sweaty hands, finding the right overgrip for you is a personal thing.

For example, some people with sweaty hands have settled on the Yonex Overgrap which are very tacky, but most people find they slip very easily with sweaty hands. So you might find the best grip for you is one which pretty much no one recommends for sweaty hands, but if it works, it works.

Luckily, overgrips aren’t too expensive and need changing fairly regularly anyway, so I highly recommend trying out a few different brands to find an overgrip that you get on well with.

Tips for Dealing With Sweaty Hands

Along with choosing the right overgrip for sweaty hands, there are a few other things that can help you deal with sweaty hands:

Whilst playing tennis with sweaty hands can be frustrating, there are some quick and easy things you can do. Using an overgrip like the ones recommended on this page can certainly help, but try to test out a few different grips to find one that you really get on with. It isn’t just the overgrip you should be thinking about. Wristbands, towels, rosin bags, and even just blowing on your hands can help deal with sweaty hands when you’re playing tennis.

Some of the links on this site are affiliate links. This means we make a small commission if you make a purchase through them.

We are a participant in the Amazon Services LLC Associates Program, an affiliate advertising program designed to provide a means for us to earn fees by linking to Amazon.com and affiliated sites.

Any cookies that may not be particularly necessary for the website to function and is used specifically to collect user personal data via analytics, ads, other embedded contents are termed as non-necessary cookies. It is mandatory to procure user consent prior to running these cookies on your website.